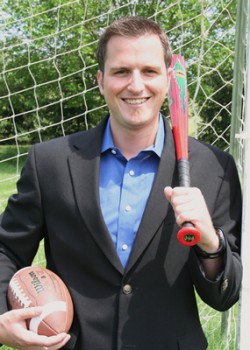 Omnilert®, LLC, maker of RainedOut™, the first text message service for sports leagues and clubs, today announced they have hired James Fitzmaurice as Director of User Development. Mr. Fitzmaurice will oversee the growth and expansion of RainedOut usage. He is responsible for recruiting new leagues and subscribers, attracting new national and local sponsors, landing new partners, and some day-to-day operations.

“We are very excited to have him on our team,” said Ara Bagdasarian, CEO of Omnilert, LLC. “Jim’s experience and talents have already created an immediate impact on the growth of RainedOut. He was instrumental in recent developments previously announced. Watch for more news to come from RainedOut now that he’s officially on board.”

Before RainedOut, Mr. Fitzmaurice taught a Sports Marketing class at Marymount University. At 28, he was one of the youngest adjunct professors at the university. During this time, he also served as a consultant to the Business Department in helping to create a concentration in Sport Management for the university.

Prior to Marymount, Mr. Fitzmaurice worked for the Washington Redskins, one of the top grossing revenue teams in the National Football League. He was the top selling sales representative for the 2007 season, generating more than $1 million annual revenue and over $7 million for the life of the contracts.

Before joining the Redskins, Mr. Fitzmaurice worked for the Buffalo Bills organization. He quickly became one of the top selling sales reps on a team that broke the NFL record for group tickets sold in a single season.

Mr. Fitzmaurice earned his Masters in Sport Administration from Canisius College in Buffalo, N.Y. He earned a B.S. in Business Administration with a concentration in Entrepreneurship from Nazareth College in Pittsford, N.Y.

About RainedOut
Established in 2004 and used by 1,000s of organizations, RainedOut is the first text message service for sports leagues and groups. This free sponsor-supported service enables non-technical people to administer and send custom or predefined messages instantly to the entire league for improved communication. It is used to cancel games, give directions, recruit volunteers, and much more. As a Web-based service, messages can initiate from a net-connected PC or from the field using a net-connected cell phone. Through one simple interface, RainedOut instantly and simultaneously broadcasts messages to subscribers’ mobile phones (via SMS text message) and e-mail accounts, and to the leagues’ own Web pages, RainedOut Page, Facebook Page, and Twitter Account. To learn more, visit http://www.RainedOut.com.

About Omnilert
Omnilert, LLC is the leading provider of unified mass notification systems for better business continuity, emergency management, and routine communication. The easy-to-use, self-service, Web-based system enables a single person to communicate timely information to thousands of people anywhere, anytime, on any device or service. The award-winning company's 3,000 clients include the U.S. Army, Boeing, sanofi-aventis, Harvard University, Penn State, American Red Cross, UNICEF, and the National Institutes of Health. Omnilert solutions are sold under the brand names e2Campus, Amerilert, and RainedOut. The privately held company is headquartered in Leesburg, Va., and at http://www.omnilert.com online.