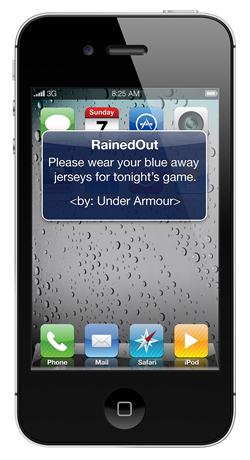 RainedOut’s self-serve ad platform taps into an audience that “needs” these messages. Unlike Twitter and Facebook, RainedOut users view RainedOut messages as critical to know. Ads that appear on these highly anticipated messages come “uncompeted,” unlike other print and web advertising that competes with other advertisers, links, photos or content.

“We did a soft launch of the $100 free ad promotion at the end of January and have already seen an uptick in the rate of new ad accounts,” explains Ara Bagdasarian, CEO of RainedOut. “Our approach was unique and somewhat opposite of Twitter. We have a few national advertisers that we invoice, but our ad platform is primarily self-service and utilizes online credit card payments. It is very convenient to create custom mobile ads and this accessibility is very appealing to local sponsors.”

Bagdasarian continued, “Your ad is placed if you are one of the top three bidders of a particular message. The placements are split across 50/30/20 percent of the messages accordingly, so even the smallest ad budget can win exposure.”

Any sized business or agency can log into RainedOut’s self-serve ad platform, create ads, set budgets, target an audience, and view placement reports. Ads are placed only with customers the advertiser wants to attract – ads be can targeted by group, location, category, or be seen on all messages across the country as a national advertiser. For example, an affinity advertiser who makes baseball bats might advertise on all messages in the baseball and softball categories of RainedOut. Ads appear as sponsors in the last 25 characters of RainedOut messages and can be a hyperlink if using a “.com” address in the ad copy. To learn more or to receive a media kit with demographics, visitwww.RainedOut.com/advertise.

About RainedOut
Used by 1,000s of organizations, award-winning RainedOut is the leading event and group communication service. This FREE+, sponsor-supported service enables non-technical people to send instant alerts to the entire community for improved communication. It is used to cancel events, change plans, send reminders, and much more. Groups can raise money with every alert sent. As a cloud-based service, messages can initiate from any net-connected computer or from the field using a standard cell phone. With one simple interface, RainedOut instantly and simultaneously broadcasts alerts to subscribers’ mobile phones (via SMS text message) and e-mail accounts, and to the organizations’ own Web pages, RainedOut Page, Facebook Page, and Twitter Account. Learn more at www.RainedOut.com.