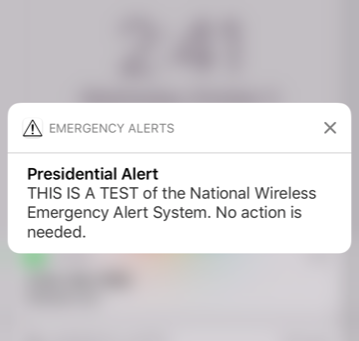 The “Presidential Alert” that millions of cell phones in the United States received at approximately 2:18 PM EDT on 3 October 2018 was a nationwide test of the Emergency Alert System (EAS) and the Wireless Emergency Alert (WEA) system.

There has been some confusion among organizations and community groups as to the difference between alerts received via the WEA and alerts received through an Emergency Notification System (ENS).

While both can deliver mass alerts to mobile devices, there are some key differences to each alert system.

What are Wireless Emergency Alerts (WEA)?

WEA is a system which allows a broadcast of messages to all cell phones in an area by way of FEMA’s IPAWS system.

WEA uses a technology to send brief messages and play an alert tone on all compatible mobile devices connected to selected mobile towers in a geographic area. These messages are not SMS (text messages), as they use a specially dedicated channel provided by the mobile carriers for emergency broadcasts.

To use WEA, the sending authority must be designated as a Collaborative Operating Group or “COG” by the IPAWS Program Management Office (PMO). Thus, local authorities must complete FEMA training and be certified to use IPAWS and use IPAWS-certified software.

Some examples of WEA are:

What was the “Presidential Alert” test?

The October 2018 test was the first attempt at trying out a nationwide alert via the WEA system for the purposes of conveying a national security message from the President.

While the law required the EAS to be tested nationwide for the past three years, October 2018 was the first time such a test has included a test of a nationwide WEA alert as a “Presidential Alert.”

What is an Emergency Notification System (ENS)?

An Emergency Notification System (ENS) is a communications solution used to send alerts by an organization, business, manufacturing facility, university, school, or community/municipality. ENS’s often send alerts via various technologies including email, SMS (text messages), apps (push messages), and voice calls. Through an ENS, there is also the capability to integrate your current systems such as fire alarms, digital signage, PA Systems, and many others.

Unlike WEA, an ENS is typically not subject to the same rules as IPAWS-initiated messages because they are adopted by an organization to keep their people safe and informed of an emergency situation. Organizations typically set their own guidelines using their individual emergency response and action plan to notify their employees and constituents of incidents that may cause harm, death, or operational failures. The organization, and the sender has much more freedom to send their own content via an ENS.

However, unlike WEA, there is no “broadcast” to mobile devices from an ENS. While an ENS can send SMS (text messages), emails, and/or push notifications to an app to those people or devices registered within their ENS, there is no mandatory delivery or ability to target all unregistered devices in a geographic area as with WEA. In an effort to meet both Federal and State legal requirements to warn employees, most organizations align their ENS with their organization’s emergency response and action plan to ensure they issue alerts, notifications, and guidance to keep their people safe from recognized crises, hazards, and exposures.

Rather, ENS’s rely on registration models where recipients “opt-in” or have their info loaded into the ENS by their organization (“opt-out”). Each organization, and often States, have their own individual guidelines for whether they use the opt-in or opt-out system.

While both WEA and an ENS can send mass alerts to mobile devices, they are very different technologies.

The WEA system is capable of reaching all devices in a designated area, or the whole nation, using a cell broadcast; however, access to WEA is tightly restricted to only FEMA-approved senders using specialized software — and messages sent must follow strict guidelines.

An ENS, such as Omnilert, allows private and public organizations to send their own alerts to their constituents via standardized channels such as SMS, push notifications, emails, voice calls, and social media.

While an ENS requires its recipients to be registered into the database, no special FEMA certification is required and the sending organization has much more control over the use of their ENS, who receives the messages, and the content that they can send.