There are approximately 70+ million security cameras installed throughout the U.S. today – yet many of those cameras are not even being utilized – and in the unlikely event they are, they are prone to human error. In fact, as the below graphic highlights – less than 1 percent of all surveillance video today is watched live and when humans are in charge of monitoring the video feed, key events are often overlooked. This is fine when someone wants to see what happened at some point earlier and timeliness is not a factor. However, in critical situations such as an active shooter incident, that is unacceptable and completely unhelpful. In those cases, seeing what already happened can’t do anything to help protect people during an incident.

For the first time ever, artificial intelligence (AI) visual analytics are now available that can transform existing IP-based security cameras into a proactive systems that can protect people and save lives.  This is a monumental shift as companies now have a solution for active shooters and gun threats by pairing their current cameras with AI-powered software to extend the benefit of that investment.

Our world has changed. With mass shootings on the rise, this huge installed base of security cameras needs to be not only monitored 24/7, but they should also be connected to platforms that have the ability to instantly send out situational intelligence and alerts, lock doors, notify police, and more. This would significantly improve the outcome of an event, whether that be an active shooter situation or other violent crime. 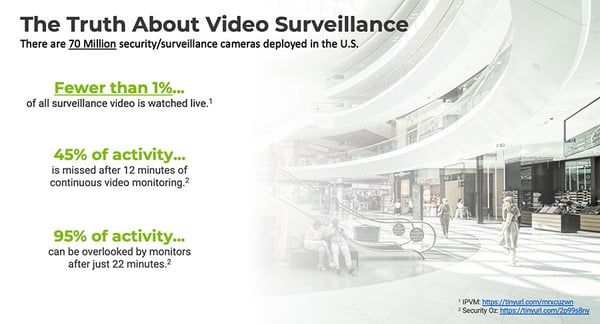 Not adding intelligent technologies such as AI alongside  existing security cameras is a missed opportunity to protect the general public - from K-12 schools, universities and corporate workplaces to retail stores, hospitals, government facilities, event venues and any place people congregate.  Clearly, organizations that already installed a camera (or many cameras) likely did that with good intentions  - they wanted more security.  However, even if people recognize the failure of their cameras to monitor and protect effectively, they often fear that improving them will mean losing the investment they already made in the security system.

But good news – those investments are still viable and usable. Even the most cutting edge technologies – such as Omnilert’s Active Shooter Solution – can seamlessly integrate with most existing security camera and video management systems already in place.  Omnilert's visual gun detection gives emergency response teams advance warning before shots are fired and delivers precise information on the location and visuals of the potential shooter. Furthermore, it is also possible to connect the Omnilert Active Shooter Solution to a other systems in your organization that can instantly activate wide range of automated actions such as triggering alarms, calling emergency services, locking doors, and sending out mass notifications. Omnilert also has these capabilities as part of its solution as well.

Leveraging Omnilert’s Active Shooter Solution can transform the effectiveness of a security camera from one that was used to review footage after the fact – to one that is capable of actively monitoring a location 24/7 and identifying active shooters as soon as a gun is visible.  With always-on monitoring providing unparalleled reliability, this solution is offered at a price point affordable to organizations and institutions of all sizes and complexities. It creates a widely deployable early gun detection solution.

AI is Better than Human-only Surveillance

The other major advantage of AI gun detection solutions is that the monitoring is not prone to human error. That is significant because according to a study by Security Oz as described in the graphic above, 45 percent of activity is missed after only 12 minutes of continuous video monitoring by one person. These results only get worse the longer a human is watching the video because the same report states that 95 percent of activity can be overlooked by monitors after just 22 minutes. Did you catch that jump? With only 10 minutes longer of viewing, and at about one third of one hour, only 5% of activity might be noticed. Again, this is unacceptable and unhelpful, and it makes the video surveillance cameras essentially useless.

With AI always watching, the monitoring never stops and when it does identify a potential active shooter, a video and image is then instantly sent to a human for verification. It only takes a second to send a notification to whoever is designated to be in charge (security personnel, outsourced monitoring, owner, police, etc.) and then that person can set off a series of emergency actions with a click of a button. Considering that most active shooter incidents are over within 5 minutes, this ability to monitor, detect and then react within seconds can help ensure the best possible outcome of any violent event.

Make Your Cameras Work for You Today and Prevent Problems Tomorrow

Having an effective and proactive response to gun violence is imperative in an active shooter situation.  No matter what kind of company you own or work for, if your cameras are only set up for reactive purposes such as watching video after an event, consider adding AI alongside them to make a much smarter, quicker and more proactive system. Not only can you extend the investment you already made into your existing security system, but you can ultimately save lives.

Interested in learning more about active shooter protection or our visual Gun Detect solution? Check out these resources.

Feel free to contact us if we can be of any service or answer any questions you may have on active shooter protection.

Omnilert recently published a 20-page white paper on visual gun detection, noting the state of gun violence in the US, how ...
Start Reading
Dave Fraser Dec 7, 2021 9:45:00 AM 4 min read

This week, I was honored to sit on a panel hosted by ZeroNow, an organization dedicated to furthering safety and preventing ...
Start Reading