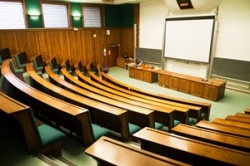 Training programs can help citizens prepare for disasters, minimizing the damage done during destructive events. The State University of New York at Canton recently held an educational session designed to teach community members how to get ready for crisis scenarios, according to the Watertown Daily Times.

The assembly concentrated on informing attendees about fundamental emergency preparation procedures, such as helpful items to have on hand during dire situations. At the gathering, a group of New York National Guard personnel held the spotlight for two hours, providing the audience with useful information for getting ready for big time trouble.

"This is a critically important issue, especially because our region is in such close proximity to an international border, and I'm thrilled to co-host such an important event where some of the most knowledgeable people in the field of emergency preparedness will be sharing their knowledge with the public in an effort to prepare them, should disaster strike," said Sen. Patricia Ritchie, a co-sponsor of the event, in a statement.

The North Country Citizen Preparedness Corps Training Program was conducted to bring New York closer to the Gov. Andrew Cuomo's goal of providing 100,000 citizens with a working knowledge of emergency preparations by the end of 2014.

Communities can supplement training programs and facilitate communication during crises with an alert and notification system that uses emergency messaging from Omnilert.