Who issues your emergency notices? 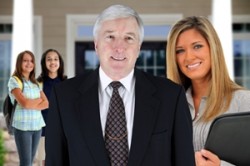 When an emergency strikes, response times are extremely important, which is why you need to make sure you have the right people approved to issue an emergency notice.

Despite your best efforts, you can't be everywhere at the same time. This means that during times of crises, you need to have people in place that you can trust to administer the appropriate response. Deciding who is equipped to do this is a decision that plagues many safety and response managers throughout the country.

Campus Safety Magazine recently published a study that examined many different aspects of emergency notification systems across campuses in the school district, university and medical settings. The following are some of the positions that are best equipped to administer these kinds of emergency alerts.

Schools and school districts
Emergencies within a school district can affect one or multiple campuses. For this reason, principles and superintendents are the two positions that are most commonly approved to administer emergency notices at 66 percent and 78 percent respectively. Being that these two positions are in charge of the goings on across campuses, this chain of command is the most logical.

However, it is important to make sure others are approved to administer notices as well in case one or both of these persons are unable to do so. The next common issuer is the security director at 34 percent, followed by emergency management at 21 percent. By diversifying the emergency alert responsibilities across different branches within the school system, you are better prepared to react during a time of crisis.

University and college campuses
In the university setting, emergency alert administration is much more spread out. The most common decision maker is the security director, with 46 percent of campuses granting approval to this position, according to the study. The police chief was right behind the security director at 43 percent.

After these two leaders, the university president, vice president and public relations department are all approved to issue alerts across 39 percent of campuses. One reason for this may be that because campuses can spread across many miles and even multiple locations, a diverse set of decision makers is necessary to cover each location and department.

Hospital systems
In hospital systems, a wider range of people are qualified to issue notifications than in other of the previous two campus types. The study noted that the security director is still the most widely approved issuer at 74 percent. However, the incident commander and system CEO are not far behind at 60 percent and 58 percent respectively. Also, emergency management employees and vice presidents are also permitted to distribute alerts in at least half of campuses.

One of the most interesting points of note here is that, generally speaking, more people are qualified to make these decisions. There are a couple of reasons as to why this could be. First, given the nature of the industry where sicknesses and injuries are common place, an event that would be considered an emergency could be more likely to occur, which means that more people need to be prepared if that does occur. Another reason could be that there are more professional level people on these campuses (as opposed to academic settings where the majority population are students).

At the end of the day, when deciding who should be responsible for administering an emergency response, you need to choose people who are responsible and you can trust. Further, they need to be trained properly so that they may be able to respond appropriately to each kind of situation. While the positions may differ across campuses, these are qualities that are universal.