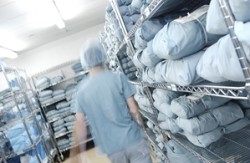 Workers with the Parkridge Medical Center, an emergency care provider in Chattanooga, Tennessee, were recently involved in a live simulation designed to help them manage dangerous scenarios in the future. WDEF-TV reports that members of the local SWAT team ran through the center on November 15, 2012, as part of a drill to teach center employees how to respond to a shooting.

"Basically we are going to have a disgruntled family member that ends up shooting some individuals in the waiting area and barricades [himself or herself] in the ICU," Dale Soloman, the center's Emergency Preparedness Coordinator, told the news source before the drill. "The [local] SWAT team, EMS, police officers and hospital staff all worked together during this scenario to better develop their emergency program."

The Parkridge Medical Center mock shooting did not interfere with patients in any way and helped team members learn from a hands-on experience. Christine Wilkinson, a nurse who was barricaded in a room with the "shooter," said that the mock shooting helped her and other staff members further understand how to deal with this situation.

A live simulation is one option for hospitals and other facilities that want to improve their emergency preparedness strategies because it provides insight into how workers would react in dangerous scenarios. Other facilities have used similar methods to educate their employees.

In Lake Charles, Louisiana, team members at the Lake Charles Regional Airport recently participated in a mock crash that included roughly 50 passengers. KPLC-TV notes that the drill forced workers to deal with passengers who suffered injuries, loss of limbs and death. Additionally, airport personnel also dealt with a simulated bomb threat to conclude the training.

Emergencies can strike at any time, and employees who understand how to control these critical scenarios put themselves in the best positions to succeed. Live simulations are one of several options businesses, cities and towns can use to teach people about dangerous situations.