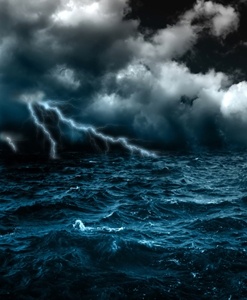 The forces of nature can be quite powerful, especially when they take on the form of massive storms. Parts of Alaska and Oregon have recently been hit by weather of destructive proportions, leaving thousands of people affected. Storms capable of impacting so many people give cause for considering our preparedness for nature's disruptive surprises.

Gigantic storm coming to a close in Alaska
The hurricane force winds that had been slamming western Alaska are finally beginning to die down, according to the Associated Press. Some areas, such as the central and western Aleutians, suffered winds of up to 80 mph. However, wind was not the only element to bear down upon Alaskans, as flooding was and continues to be a threat for many communities.

The danger of flooding comes as no surprise, considering the fact that there are records of waves reaching 28 feet in height in the southwestern Bering Sea. Though the winds are subsiding, the areas of Kuskokwim Delta, Bristol Bay and the Pribilof Islands are still under flood warnings.

So far, the Alaska Division of Homeland Security and Emergency Management has no reports on the damages caused by the storm, according to Jeremy Zidek, spokesman for the organization.

Power outage in Portland
Over 10 thousand customers of Pacific Power recently lost electricity along with the Portland Airport. The outage occurred when a tree was blown into a northeastern Portland substation by powerful winds. The airport got by without power for a little under an hour on emergency generators, until electricity was restored around 9:10 a.m.

Despite the outage, air fields and checkpoints remained functional during the power loss. However, some backup was experienced at the ticket counters.

Outside the airport, thousands were deprived of power. Several schools were affected by the outage within the Portland Public Schools District. Additionally, close to 3 thousand customers of Portland General Electric living in Clackamas County experienced loss of electricity.

The danger posed by large storms, like the one in Alaska, can be difficult to deal with without effective means of communicating with those affected. Even the relatively smaller impact of a temporary power outage can become challenging to manage without the proper tools, a trouble that would only be enhanced if the disruption lasted for an extended period of time. Technologies such as emergency notification systems can be a great asset in times of crises. These systems can use text message alerts, like Omnilert, to reach many people rapidly in cases of emergency.