Slow year for tornadoes does not mean to stop preparedness efforts 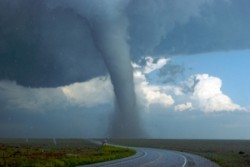 Tornadoes pose significant threats to everything and everyone who stands in their path. The violent storms can tear homes from their foundations and fling cars miles down the road. Luckily, the United States has seen the number of tornadoes drop in 2013.

USA Today reports that the country is on pace for its calmest year in more than 10 years. Gregory Carbin, warning coordination meteorologist with the Storm Prediction Center, gave the news source a breakdown on how the year has played out so far.

For comparison, there were more 1,000 tornadoes in the US by the same point last year. Carbin attributed the significant drop to the decline in violent thunderstorms. This diminished wind shear, which is a sudden change in direction, a key component in the formation of tornadoes.

Further, one expert stated that this has been the calmest year since 1950. Greg Forbes of the Weather Channel believes that only 2002 and 1988 featured fewer tornadoes than 2013 will before it comes to its conclusions.

Though this year has been quite quiet, some officials still want to make sure that necessary preparedness measures are in place. According to Reuters, an Oklahoma lawmaker wants a public vote on whether the state should fund tornado shelters in public schools. This comes after the State House of Representatives decided to not include school safety as one of the topics to discuss during a special legislative session. Rep. Joe Dorman believes that the decision not to talk about school shelters is an awful one.

"The motion to kill it means to me that no one else had a plan or that they wanted to leave it up to local schools to fund shelters, many of which cannot afford to do so," Dorman said.

Dorman has a valid point. Preparedness isn't something that anyone should take lightly. Communities in tornado-prone areas should implement tools like Omnilert's emergency notification systems. These resources can disseminate text message alerts to ensure that citizens are out of a tornado's path and can avoid harm. Ultimately, increasing communication is a practical way to ensure that everyone is as safe as possible from tornadoes.