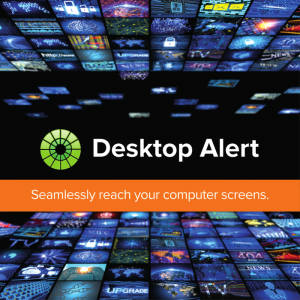 Although the company has long supported third-party desktop alerting applications and will continue its support for a variety of endpoint integrations, numerous customers requested a native desktop alerting solution with the same ease of use and network reliability they expect from Omnilert.  “Carefully listening to the needs of our customers informs innovation at Omnilert,” explained Co-founder and CTO Nick Gustavsson.  “Our customers told us they needed a holistic alerting extension that could reach users at their desks, in meetings or in classrooms – even when cell coverage might be sketchy or text and phone ringers are turned off.”

The system is specifically designed to be easy to use, cost-effective, and simple to deploy:

Flexible Alerting Modes – The system offers three highly visual display options: full-screen alerts for urgent warnings, scrolling messages for important alerts, and pop-up messages for simple notifications. Administrators can easily set default behaviors for the screen notifications including the duration of the screen alert as well as the duration of the audible alert tone broadcast when the message is displayed.

Simplified Groupings – Specific user computers can be added to one or more groups to facilitate custom messages and instructions based on the person’s role, department or location.  This can be especially powerful when paired with Omnilert’s Scenario Manger, which delivers emergency notice sequences based on pre-planned responses to specific situations.  For example, each group of recipients could receive alerts with instruction reminders specific to their location and/or to the type of incident (fire, intruder, etc.).

No Servers or Middleware – Omnilert’s desktop alerts require no expensive servers, VMs or middleware to deploy and maintain.  Every computer polls the Omnilert network directly via standard web protocols at user-defined intervals.  The simple architecture virtually eliminates both IT overhead and firewall issues.

Self-scaling – Because the desktop alerts interact directly with Omnilert’s powerful cloud-based network and do not rely on limited local computing resources, the system is completely self-scaling and can support a virtually unlimited number of desktop and laptops to meet the needs of nearly any organization.

Zero-Configuration Install – Adding a computer to the Omnilert alerting environment is fast and easy.  Users or administrators simply run a simple installer to activate the machine.  Each installer download is fully pre-configured with the organization’s information so users never have to keep track of account credentials or product keys. The installer is currently available for Windows computers; a Mac version will be available shortly.