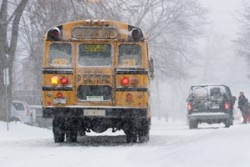 Extreme weather conditions can wreak havoc on communities when they are caught off-guard. At a recent meeting, New Hampshire officials discussed how their city handled the area's latest winter onslaught and ways that response capabilities could be improved for future incidents, according to the Pelham Reporter.

In the wake of a severe January blizzard, Pelham administrators came up with a laundry list of methods for increasing winter storm preparedness. For instance, Eddy Jowers, Director of Pelham Public Works, suggested blending salt into the city's sand reserve to help reduce ice on streets.