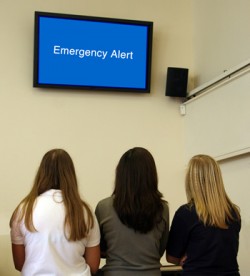 This new integrated product by Omnilert allows campus safety officials to enter one message and deliver it simultaneously and uniformly across multiple endpoints such as televisions, cell phones, desktops, pubic address, web sites, social media, alert beacons, and more. Previously, campus safety administrators would have to request another department to update their cable TV network or manage a separate activation process by themselves, which increases complexity, slows delivery, and raises the risk for more problems.

“This kind of innovative approach to serving our university needs is why we’ve been with Omnilert for five years and Campus Televideo for nearly fifteen years,” said Mark Reboli, Misericordia University. “Though you never hope to have a need to reach your campus in an emergency situation, this integrated system adds an important piece to the University’s emergency notification plan with a valuable, direct, and simple way to reach our students throughout the campus without safety personnel performing additional work.”

“Thanks to Campus Televideo’s efforts, the Omnilert platform now extends to a powerful device that we were not previously reaching – live broadcast television,” said John Casey, vice president of partner relations at Omnilert. “During any sort of emergency, being able to reach the entire campus as quickly as possible is the number one goal, and our single point of origination will allow safety administrators to do just that through their Omnilert web portal.”

“With campus safety a top priority for schools today, this new, first-of-its-kind tool will allow administrators to quickly and easily deliver a consistent message across multiple device types on campus,” said Jon Stewart, Campus Televideo’s senior director of business operations. “This is an important offering that we can now make available in our portfolio of services that we tailor for every customer we serve.”

About Campus Televideo
Campus Televideo (www.campustelevideo.com) is a leading provider of custom cable TV, ResNet data and other telecommunications services to colleges and universities, as well as off-campus student housing. Founded in 1984, the company provides full service solutions, including programming, design, installation, maintenance and technical support, to more than 230 campuses nationwide.