Too Many: Gun Violence in America 2021

Per the statistics, the US is an especially violent country.

2021 isn’t helping to lower these statistics. Per the FBI, gun ownership rose during the Pandemic, with a 20% increase in the number of federal background checks for gun purchases from March 2019 to March 2020.2

The worst part of these statistics is the increase in deaths attributable to guns, especially those of children. Although 2021 isn’t complete, its numbers already outpace most years. 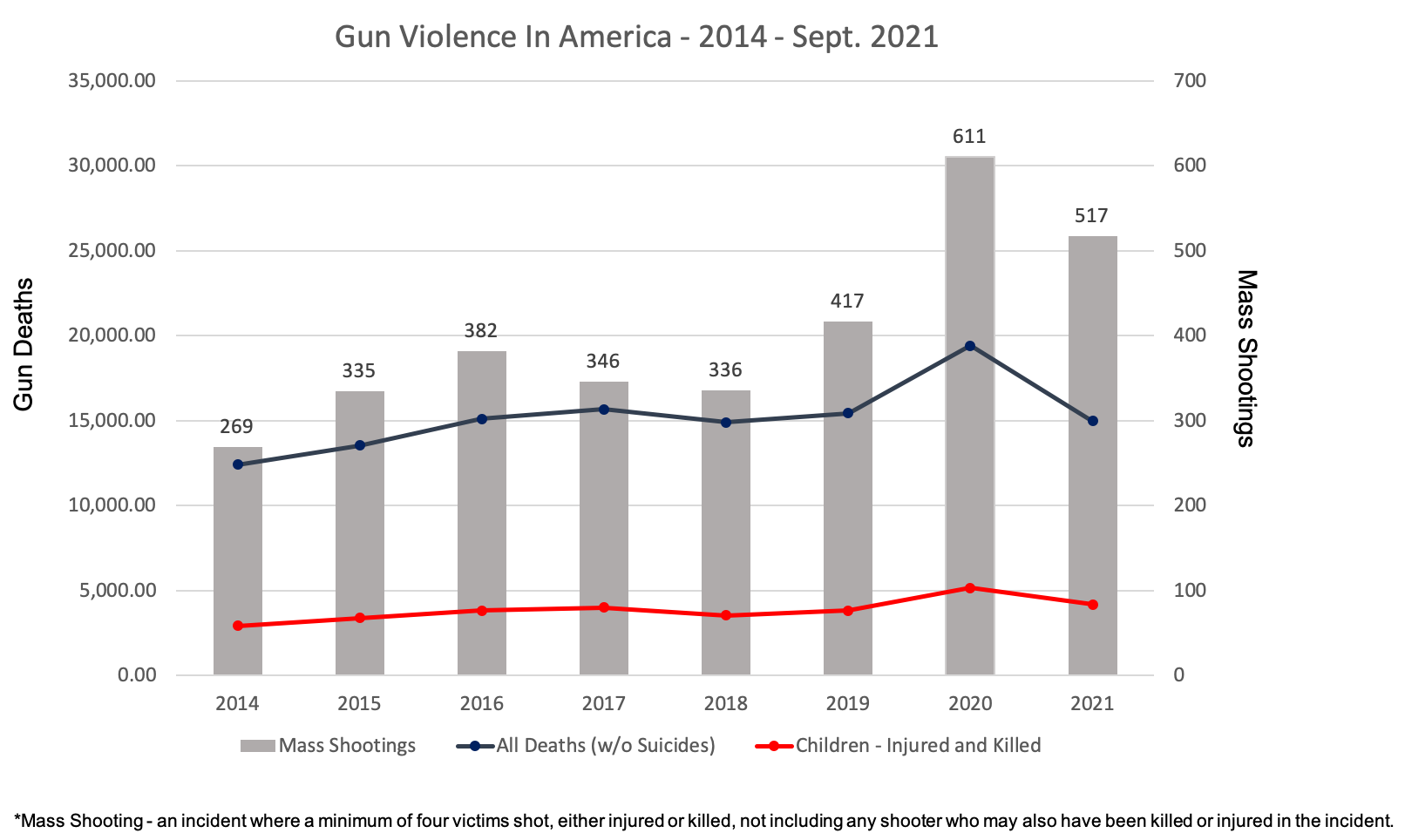 Mass Shootings on the Rise

Another unfortunate statistic is the rise of mass shootings in the US.

As of September, the year 2021 year has already become one of the deadliest on record for mass shootings. According to the Gun Violence Archive (GVA)3, 517 mass shootings have occurred in 2021, and more than 32,000 individuals have died via guns by their own hand and at the hand of another.

In many of these incidents, the scene often follows the same path: Someone is unhappy and plans retribution.

They are typically young, male and carry multiple weapons.

They park, grab their guns and walk towards the school/store/office … intent on harm.

The incident is usually over within 5 minutes, often too quickly for help to arrive.

And commonly, the entire act is caught on video.

Unfortunately, this scenario isn’t simply the plot of a sensational television show. It is the unfolding of events that have occurred at manufacturing plants, schools, stores and government facilities across the US:

The GVA defines a mass shooting as an incident where a total of four or more victims are either injured or killed with a gun. Their definition does not include the gunman in the count.

One doesn’t need a formal definition to grasp the gravity of violence in the US, nor the staggering statistics to understand that we need a solution to stem this gun violence.

Together, technology can offer proactive, preventative applications that strike a preemptive defense against gun violence.

Popular Posts
Top 5 Emergency Message Templates
Emergency notification message templates maximize the effect of your emergency preparedness plan.
Omnilert Introduces the Industry's First Solution for Mass Engagement
Empowers Small Safety Teams to Have Rich, Targeted Interaction with Large Groups of People
Top 2 Reasons Your Safety App is Not Effective
While many emergency notification providers focus their efforts on mobile apps, the lack of user adoption is alarming. In speaking with a recent ...
Top 6 Emergency Alert Templates for Outages
Power and network outages can impact operational business continuity and, in some cases, cause harm if left unaddressed. When it comes to ...
An Officer’s Perspective: Advance Warning Before Shots Are Fired
I remember well the three tones quickly followed by the broadcast, “All cars, man with a gun…” or worse, “Report of shots fired at…” with little more ...
Never Miss an Update!