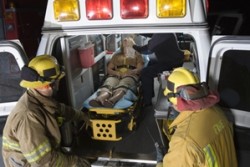 Wherever people may be, whether at home, work or out and about, safety is a concern. This means that being prepared for dangerous situations is essential, especially for emergency response personnel. To make sure responders are ready to handle crisis scenarios, training programs are being implemented both domestically and abroad.

The Ministry of the Interior and Qatar Petroleum have partnered to open a college for safety and emergency training in the city of Doha, according to Trade Arabia. Personnel working in the gas, civil defense, oil, military aviation and petrochemical industries are those primarily intended for the advanced training offered by the school, called the Ras Laffran Emergency and Safety College.

Instated by Sheikh Abdullah Bin Nasser Bin Khalifa Al-Thani, the interior minister and prime minister of Qatar, the college is equipped with modern facilities and its grounds span over 600 miles of terrain. The inauguration was attended by other notables such as safety professionals, foreign guests and senior officials.

The facilities provided at the RLESC are cutting-edge to allow for training and simulation in a variety of environments and scenarios. The practice settings include a warehouse, a shopping center and a commercial building. Courses offered will cover a variety of skills, such as emergency medical services, hazardous materials, civil defense and aviation, industrial fire fighting and search and rescue.

The college is also working with U.S. institutions, including a liquefied natural gas research project supervision by Texas A&M's Qatar branch and a degree granting program with the University of New Haven Connecticut.

The training was directed by local agents from multiple organizations and specialists in emergency response and related fields. Members of the Salt Lake City Fire Department Battalion Chief Karl Steadman and Captain Mark Hafen took part in the exercise.

Participants performed various tasks related to an accident involving a streetcar, a vehicle, and a cyclist. For instance, UTA police conducted a rescue operation to save a dummy trapped under a train. Another exercise involved helping a live person playing a victim.

When it comes to unexpected emergencies, preparation is key. Training responders is essential, but communication is also key in crisis situations. Keeping both emergency personnel and civilians informed can be facilitated by using technologies such as emergency messaging. Another aid to disaster preparedness are mass notification systems, like Omnilert.