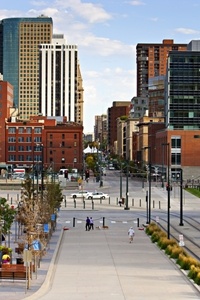 In some cases, situations align and result in major catastrophes. This was the case in Colorado as a number of events led to massive flooding that devastated a significant portion of the state, displacing countless people and causing massive damage.

According to CNN, the flood was caused by two primary factors - steep canyons and record rainfall. Robert Kimbrough, a hydrologist at the U.S. Geological Survey, explained that the rain didn't stop for two days.

"This flood was a direct result of the large amount of rainfall that occurred in a widespread area, essentially from Denver north to almost the Wyoming state line, and for a long duration - for about a 48-hour period last week," Kimbrough said.

On September 12 alone, approximately 9.08 inches of rain fell in Boulder, practically doubling the previous record. This as after the storm dumped over three inches of rain on the area, optimizing the landscape for flood conditions.

While the storm moved out rather quickly, the effects will be felt for quite some type. NBC News recently reported that some officials believe some towns will be uninhabitable for months. Further, the news source notes that Eqecat, which models disaster damage, has estimated that "property losses could hit $2 billion."

Recovery efforts will be quite difficult because the flood hit a lot more than towns and rural areas. The water reached the Front Range, causing 22,000 gallons of oil to spill. As a result, officials will have to find a way to decontaminate the immediate vicinity before it's completely safe once again.

Additionally, the flooding still poses a threat in some areas. Nebraskan officials have warned citizens to avoid any liquid that may have come into contact with the flood water.

Unfortunately, the massive flooding has led to at least seven deaths. There are others presumed dead and hundreds are still missing, but authorities likely won't have the official figures for quite some time.

Safety officials can minimize risks for future catastrophes by instituting emergency alert systems, like Omnilert. This resource can send wireless emergency alerts through calls, emails and texts to ensure that every citizen knows how to stay safe and can stay updated with late-breaking information. The emergency messaging channel is extremely beneficial and effective during crises like the massive flooding in Colorado.