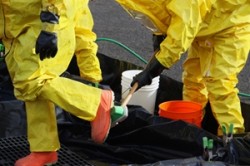 Chemicals can present a significant danger when they are released in large quantities and unpredictable ways. In cases where hazardous materials are exposed to the environment or to a community it is imperative that properly trained responders clean up the mess as soon as possible. Let's take a look at how emergency personnel handled recent chemical spills in Massachusetts and California.

Massachusetts railroad accident
A chemical spill recently occurred at a rail yard in Upton due to a difficulty with a valve, according to Milford Daily News. An extremely flammable substance used in the production of plastics, Styrene, was released in the accident. The alleviation of the spill was aided by the swift response of emergency personnel, weather and safety measures, according to town officials.

"Every one of these situations is different, based on what happened and the chemical spill," Fire Chief Aaron Goodale said. "In this situation, no one was injured and no one needed to be rescued, so we spent a significant amount of time building up resources on the scene."

Goodale remarked that the fire department has prepared for hazardous materials scenarios. Emergency personnel at the department have gone through much training for events like chemical spills. Foam training is among the kinds of exercises performed by the department, Goodale said.

Truck stop mishap in California
A truck stop in Hesperia was the site of a recent 600-gallon chemical spill, the Daily Press reported. The release of hydrochloric acid was caused by a defective valve on the tank of a semi-trailer. Exposure to the toxic substance can lead to skin irritation, burning of the throat and death when inhaled or ingested, according to officials.

The San Bernardino Fire Department's hazmat team arrived after the truck driver discovered the leaking valve and contacted the department. The situation was considered hazardous by the emergency officials that responded to the report. An evacuation was in effect at the truck stop for several hours, displacing roughly 200 people. No injuries were reported in connection to the accident.

Local experts on dangerous chemicals stood by to observe while a private contractor handled the remainder of the cleaning process. Further leakage was prevented and the acid that did not escape from the 4,800 transport was transferred to another conveyor.

Emergency response personnel played a pivotal role in containing the chemical spills in Upton and Hesperia and preventing harm to people in those areas. The effort to keeping communities safe in situations like these can also benefit from an emergency communication system that allows officials to notify civilians of dangers in the vicinity. For instance, mass notification systems that use text message alerts, like Omnilert, can be effective for spreading urgent information in real-time.